August 27, 2020
on May 9, 2019 E-Cig & Vape Reviews, Reviews
Refining and improvement have always been the cornerstones of any industry, but that holds doubly true when it comes to vaping. The Joyetech eVic Primo Fit aims to be the shining example of an evolution of a device that stems all the way back to the original eVic. But how far has it come since then? This new revision now powers up to an impressive 80 watts with help from the built-in 2800mAh battery.
But enough talk, let’s dive down into the details of this kit and determine if it really serves to be a worthy entry to the eVic name. Be sure to check the vape buyer’s guides for important information to take into consideration before making your purchase. 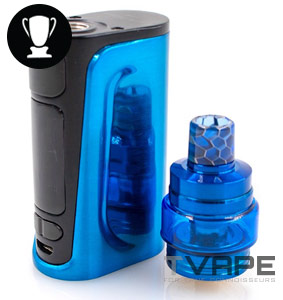 Evident from the name of the mod itself, the Joyetech eVic Primo Fit takes after previous releases in the Primo lineup opting for a more rounded case design instead of the boxy yet rounded edges from the original eVic.

The main difference is that the entire mod has been shrunken down by a good 30% of its original size making it even easier to grip and carry compared to its predecessors. By doing this it’s sacrificed the option of using a swappable 18650 battery and instead is powered up by an integrated 2800mAh battery instead. If you are looking for a 510-thread battery for oil cartridges we suggest checking out the PCKT One Plus.

The use of the internal battery might invite or turn away potential vapers depending on what they’re looking for. True beginners might see more value in this kit compared to the previous revisions as it eliminates the need to purchase a battery separately while more seasoned vapers might baulk at the lack of ability to swap depleted batteries on the fly.

Overall fit and finish don’t get any complaints from me. The device feels as solid as a brick, offering no creaks or annoying rattling when handling or moving the mod about. While the selection of available colorways is quite limited, they’re executed very well and even includes a “Dazzling” colorway which looks to be a design straight out of Smok’s repertoire.

The finish holds up well to regular wear and tear but dropping or hitting the mod against anything hard will inevitably result in some scratches or even dings in the finish.

The 0.96 inch OLED display looks to be an upgraded version from what was used in the old eVic releases. It’s bright and makes all the relevant information displayed easily legible even under direct sunlight. The firing button protrudes ever so slightly from the main body making it easy to find even when not looking and it feels great to use thanks to the resounding click it makes whenever pressed. 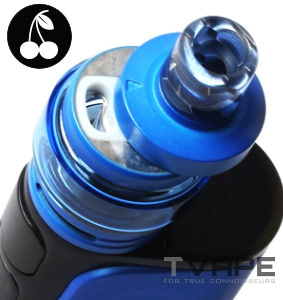 One of the nicer details about this kit is that it comes with both a direct lung and mouth to lung coil head which makes it an ideal kit for beginning vapers.

A pair 0.5 ohm and 1.2-ohm coils are packaged with the kit and both and having the option to choose between the two styles of vaping is a feature not often made available straight out of the box for most starter kits out there.

The direct lung coil is sufficiently loose and airy which definitely helps out in providing that much-needed airflow to create large volumes of clouds. The flavor feels a bit muted when directly compared to the mouth to lung coil but in using the latter you obviously will get a large decrease in vapor production with a tighter, more flavorful and dense vape as a  tradeoff. 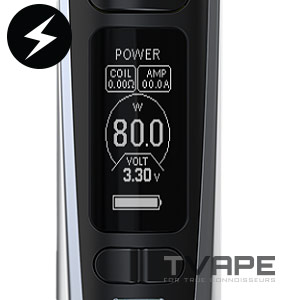 The Joyetech eVic Primo Fit fires up to 80 watts, giving it a surprising amount of headroom despite its diminutive size. While it might have some troubling ramping up the temperature on some extremely low resistance coil builds, it should work fine for the majority of sub-ohm coil heads available.

It has to be said that the Joyetech eVic Primo Fit is definitely not the right mod to get if you’re looking for enthusiast level performance.

If you are someone who also uses 510 oil cartridges and other vapers have reported Yocan Wit is a good place to start.

Despite all this, the Joyetech eVic Primo Fit works perfectly as a great starter kit. Firing delay in non-existent and I’ve yet to experience a misfire using this mod. The fact that it also supports multiple vaping modes such as temperature control for stainless steel, nickel and titanium coils, as well as customisable TCR, is just another added plus to a simple starter kit. 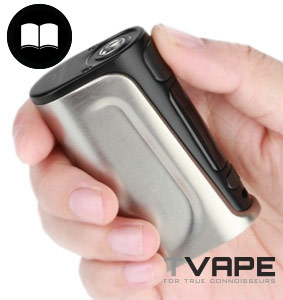 Thanks to the relatively large-sized OLED display, the UI definitely allows for some breathing room for easier navigation and intuitiveness. Granted, a small learning curve needs to be overcome to truly know the ins and outs of the mod, the mod is a snap to use straight out of the box for vapers who don’t want to bother with the details and just want to vape in straight up variable wattage mode.

The included Exceed Air Plus tank that comes with the kit makes things a lot easier especially for those to tend to vape on the go. A healthy 3ml e-liquid capacity keeps you topped up longer so that you don’t have to refill the tank often and refilling the tank is a breeze anyway thanks to the inclusion of a sliding mechanism on the top cap. 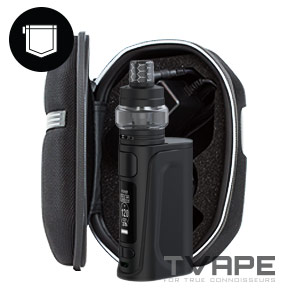 Thanks to the minuscule dimensions of the mod measuring out to a mere 104.5*40.0*22.5mm, the  Joyetech eVic Primo Fit is a joy to hold in your hand thanks to its ergonomic shape.

The small size makes it easy to pocket and the smooth rounded edges contribute to this as there aren’t any rough or sharp areas where the mod can snag when taking it out of your pocket or bag.

Power users might find the internal 2800mAh battery to fall a bit short of a full day’s worth of use, but casual and neophyte should find that the Joyetech eVic Primo Fit should offer lots of lasting power to get you through the entire day. And in case that the battery does fall flat in terms of mileage, the mods 2amp charging via micro USB gets the mod right up to speed in a jiffy. 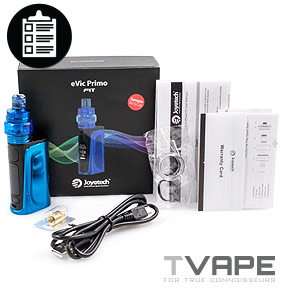 It’s definitely not perfect, but the Joyetech eVic Primo Fit does have what it takes to be considered a refinement over its older eVic siblings. While not necessarily a direct upgrade, the mod is designed for the potential vaper that’s never owned or operated an electronic cigarette.

The option to choose between a direct lung or mouth to lung coil is a prelude to this and is a very welcome addition to the kit. To conclude, there might be similarly specced mods out there that might have aesthetics more suitable to your preference, but the Joyetech eVic Primo Fit is a definite winner if you’re a fan of the form factor.