December 11, 2020
on October 7, 2018 E-Cig & Vape Reviews, Reviews
It’s been a while since we’ve reviewed anything from Vaporesso so its only fitting that the next review to be of their new flagship device, the Vaporesso Polar. Hailed as the successor to their previous flagship, the Vaporesso Tarot, the Polar brings a few all-new features along with some refinements packaged into a familiar frame. The Vaporesso Polar kit also comes bundled with the Cascade Baby SE sub-ohm tank, another new entry into Vaporesso’s line up of high-performance atomizers, so saying that we’re a bit excited to get down and dirty with this device might be a slight understatement.
Let’s get to it. Be sure to check the vape ranking chart to learn out the best units on the market and other informartion to take into consideration before making your purchase.
Editors Note: For those who are looking for the easiest and most efficient way to make the switch, we suggest checking out the Slice, a pod-based vaping system that offers a hassle-free approach to vaping, no settings, no ohm law, just vapor. 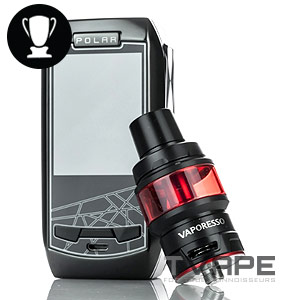 If there’s anything we’ve learned to appreciate with Vaporesso products, it’s their consistency. While other manufacturers have been all over the place when its come to the aesthetic design of their mods, Vaporesso has held steady and true to a consistent design language over the years.

From the Vaporesso  Tarot to the Tarot Nano, and finally to the here and now of the Vaporesso Polar, all their devices take inspiration from a singular design language that is continuously improved on and refined.

This fact is very evident with the Vaporesso Polar as it takes form in a familiar shape but with a narrower design compared to its older brothers. This small design change not only gives the device a sleeker and more attractive look but also improves on its ergonomics as well, making it a lot easier to hold in hand.

The Vaporesso Polar’s lack of deviations from its previous iterations is a good thing as the older Tarot Pro was generally a very well designed and well-received device. Everything from the centered 510 connection up on top, to the easily accessible firing button on the side, not much has changed with the Vaporesso Polar.

The Polar still makes use of the same magnetic backplate for holding the dual 18650 batteries in place effectively, not to mention the unique 4 button interface that gives you a dedicated menu button for even easier UI navigation.

The display on the Vaporesso Polar is crisp, colorful, and clear, allowing for easy viewing of the device’s status and information with a cursory glance, even under exposure to direct sunlight. A micro USB port can be found towards the bottom end of the mod which can be used to charge the device as well as deliver handy firmware upgrades for even potentially improved functionality and ease of operation in the future. 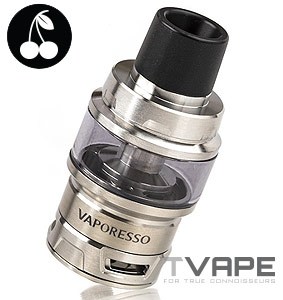 Going with what has slowly become a standard with most high-performance sub-ohm tanks, the Vaporesso Polar kit comes packaged with a GT mesh coil as well as GT CCELL 2 ceramic coil rated at 0.3 ohms and with the former rated at 0.18 ohms. We were quite impressed by the performance of the included mesh coils as they were able to deliver bucketloads of vapor with more than adequate flavor production.

For the more flavor inclined though, the CCELL coils are a better bet as flavor production is fantastic as the coils managed to bring out every note of flavor from the e-liquid.

As for the tank itself, the Cascade Baby SE doesn’t hold back when it comes to airflow and small yet significant quality of life improvements. The triple adjustable bottom airflow ring offers lots of room for adjustment, giving you a good amount of precision when it comes dialing in your vaping experience. Each of these three air slots measures out to 9x3mm so you can just imagine the potential airflow and vapor production you can get out of this tank; it’s definitely substantial. 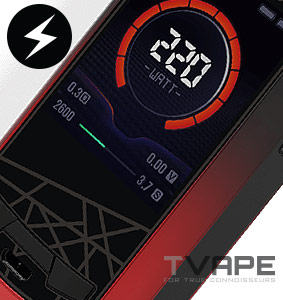 The Vaporesso Polar is no slouch in the power department especially with its implementation of the all-new revision of its tried and true OMNI board, the OMNI board 4.0.

Featuring an instantaneous firing speed of .001 seconds, there’s no delay at all from the moment you hit that firing button to when the coils start firing up. This new version of the OMNI board is as reliable as ever, never misfiring and always yielding results with every tangible click of the firing button.

Outfitted with the complete gamut of vaping modes and settings to set you up with anything that you might ever need, the Vaporesso Polar fires up to a maximum of 220 watts in variable wattage mode.s Temperature control is well supported as well with compatibility to stainless steel, titanium, and nickel-based coil heads for quick and easy temperature control.

Adjustable TCR is also available for use for the nitpickiest of vapers and is quickly adjusted via the onboard menu so there’s no need to hook the device up to a computer and tinker with additional software just to configure your settings on the Vaporesso Polar. 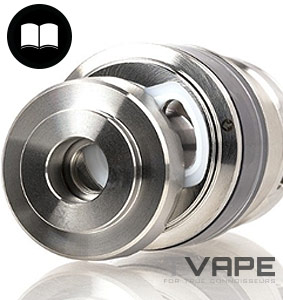 Given the sheer abundance of features available out of the box with the Vaporesso Polar, it’s understandable for it to have a small learning curve in order to get familiar with the full capabilities of this device. For most vapers though who have no qualms vaping with the simple but always effective variable wattage mode, setting up the device is incredibly easy.

Simply thread on your preferred coil head into the tank. Thread the tank onto the 510 connection on top of the mod, pry off the magnetic back panel and insert your two charged 18650 batteries in accordance with the polarity indicators in the battery sled. Click the firing button 5 times then you’re good to go!

The Cascade Baby tank features a sliding lock top fill mechanism for quick and easy refills, even when on the go so you’ll never feel that refilling the tank is a chore. Coupling that with the impressive maximum 6.5ml capacity of the tank, and you’ll find yourself refilling only once to twice per day depending on usage. 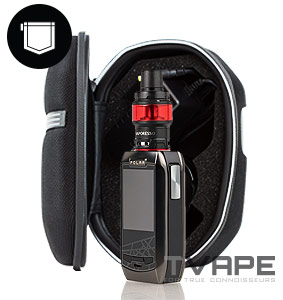 With the dimensions of the Vaporesso Polar measuring out to 45mm by 28mm by 144mm, the entire kit is quite compact for a dual 18650 device. The mod can comfortably fit into any save the tightest of skinny jeans so most users shouldn’t have to worry about the pocketability of this kit.

Battery life is unsurprisingly impressive, and we’ve had no problems so far in terms of battery longevity with the Vaporesso Polar easily delivering at least a day or two worth of vaping power before requiring a recharge. 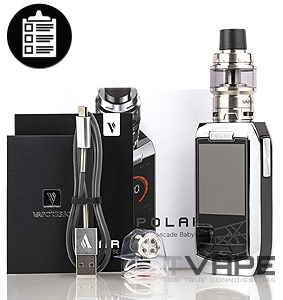 The Vaporesso Polar is yet another improved on an already impressive design. The strong feature set combined with well-designed Cascade Baby sub-ohm tank yields fantastic results for vapor and flavor production.

Topping all of that off with a sleek and tasteful design just the icing on the cake for anyone on the lookout to purchase their next high-performance device.