Vapers are often stereotyped as lazy, uneducated, sloths devouring fast food while binging on Netflix. This stigma is often the reason most herb users choose not to tell even their closest friends and family of their lifestyle, due to fear of being unfairly judged.

Here at TVape, we love to dispel myths and stereotypes related to the vaporizer community and recently sent out a survey to our customers asking them about their overall health and lifestyle. At the time of writing, we received over 440 responses. Thank you to all who participated!

While those who typically stereotype vapers may be surprised by the results, we found the results showed what every vaper already knows; they are just the same as everyone else.

Also once you are finished with Part 1, be sure to check out Part 2 of our Vaper Lifstyle Survey, with even more stereotype shattering data!

Who is a vaporizer user?

We began by determining a sense of a vaporizer user’s average age. Many people may assume vapers are in their early 20’s and most likely students. 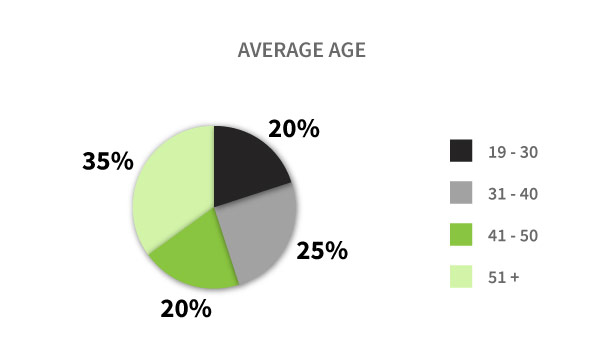 These results are contrary to many people’s assumptions about vapers, and it seems as people age they trend towards an alternative to smoking. However, with the age groups split so evenly, it can be said people enjoy vaping at almost any age and it is a community certainly not reserved for just the younger generation. 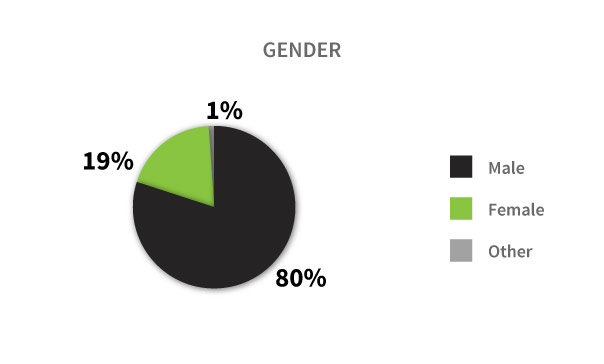 Next, we wanted to get a sense of which gender vapes the most. It turns out right now vapers are primarily male, with our survey finding  80% of all respondents were male, while only 19% were female.

This result is interesting, as the vaping community can come across as predominantly masculine, but it is surprising to see such a big difference between the genders. However, a study by the World Health Organization states “Globally, 40% of men smoke as compared with nearly 9% of women”.

So, in essence, our survey is in line with global averages. If men globally smoke more than women, 40% vs 9%, then it would make sense that the sheer number of men looking to switch to vaping would be greater than the number of women who are also looking to switch. 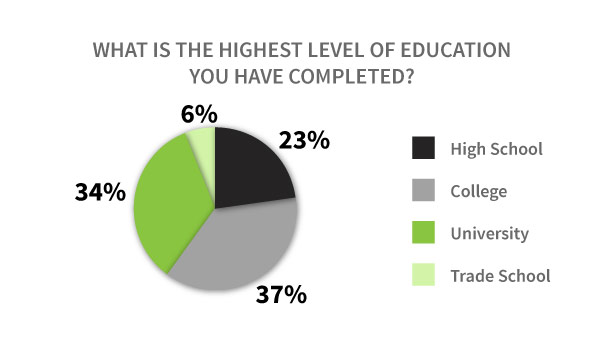 We then wanted to get to know more about the education level of vapers, as a common stereotype is how vapers are high school drop outs unable to complete a higher education.

Only 23% have completed high school, but seeing as 20% respondents are between 19 – 30, it is safe to assume a percentage of these vapers are currently enrolled in post-secondary and just have not completed their degree yet. 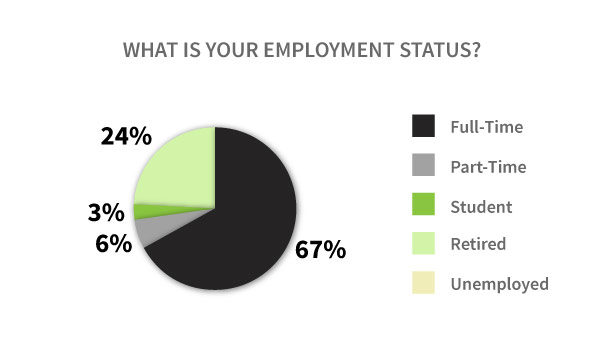 With an education in mind, we then wanted to get a sense of people’s employment status. A common public perception is to assume vapers are less likely to be able to hold down a steady job because of their lifestyle.

The current unemployment rate in Canada is about 6.5%; in our study, we found no one actually listed themselves as unemployed. Perhaps people were too embarrassed to admit this or simply felt that they were making enough money here and there to consider themselves as part-time, which accounted for 6% of respondents.

Even if we assumed half of the part-timers were actually unemployed (so 3%), this still puts the total number of employed vapers up to 94%, leaving the last 6% split between students and the unemployed. This rate is still .5% lower than the average trend in Canada and shows how, despite public perception, vapers are more than capable of finding full-time employment and have the responsibility to plan for retirement.

Also when you factor in costs for herbs, waxes, and oils on top of the vaporizers themselves, those who are unemployed would probably not have the disposable income to afford these types of luxury products. After all, there is no way someone who is unemployed is going to have the cash for a Volcano.

However, vaping is starting to become more affordable and more and more units like the Utillian 420 are being released, geared towards providing an excellent vapor experience for under $100.

So now we have an idea of who these vapers are, (primarily males, in their 20’s to passed their 60’s, who hold a college or university degree, and are either working full time or retired), which made us curious about fitness and overall health. 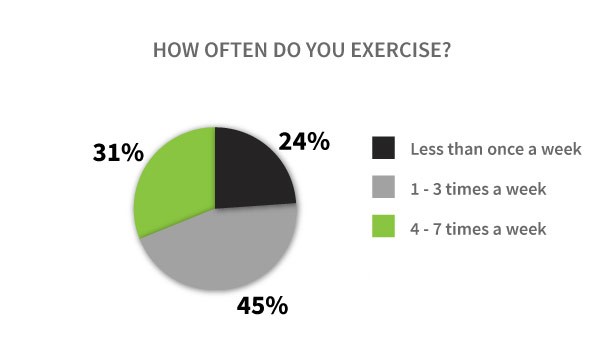 From this, we can conclude roughly 3 out of every 4 or 75% of vaporizer users work out in some capacity during the week, dispelling the perception of vapers being more likely to sit on the couch than exercise. 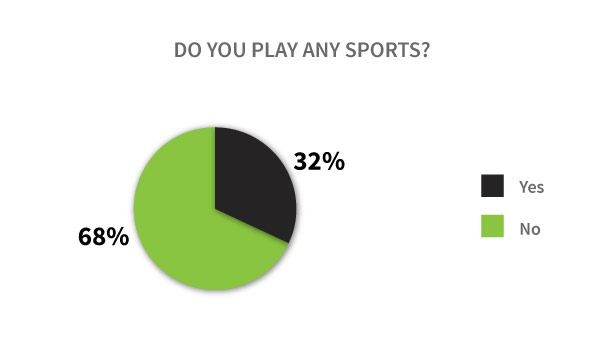 We followed up our exercise question, to see how many vapers play sports as a form of exercise. 32% responded they did play sports, while 68% said they do not. While those who do not play sports are in the majority, these results show that 1 in 3 vapers are involved in sports in some capacity.

A Canadian Heritage Research paper found “In 2010, 7.2 million or 26% of Canadians age 15 and older participated regularly in sport”. So when we compare the percentage of vapers polled who play sports versus the Canadian average, it would appear vapers tend to be slightly (6%) more active in sports than the general public. 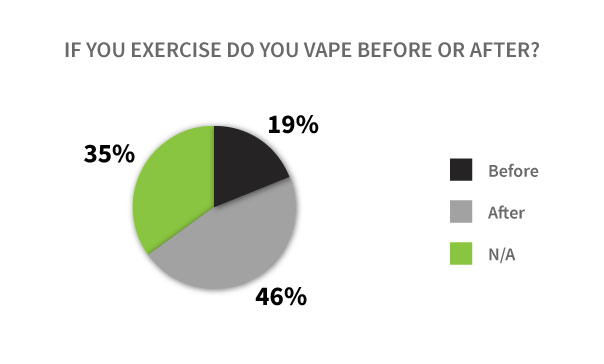 Many people would think vaping before exercise would be demotivating, but an article by thekindland.com, highlights how vaping before the gym could enhance your workout, stating, “I hustle up to a cardio machine, put my headphones in and lose my sense of being as I become the music and do a minimum of 15 minutes of cardio without realizing it.” 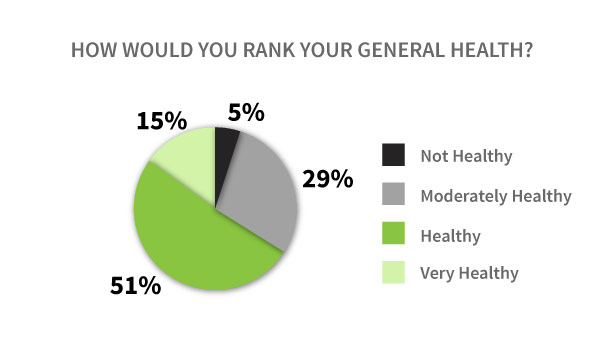 While the public may not perceive vaporizer users as healthy in the traditional sense, 95% of respondents felt they were healthy in one capacity or another.

So now that we know a bit more about the fitness and health of vapers we decided to ask them about their eating habits. A general perception of a vaporizer user paints them as a McDonald’s loving slob who would rather eat fast food every night than cook themselves a proper meal. 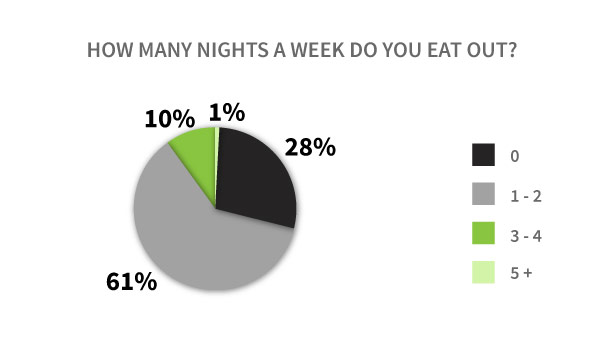 We first asked consumers how many nights a week they eat out. 61% of respondents said they only eat out once or twice a week.

So we can conclude vapers are fairly average compared to the general public when it comes to amount during a week they eat out.

We then probed a bit further and asked when people eat out do they prefer fast food or a sit-down meal. The general public would assume vapers much prefer fast food, but our results were different. 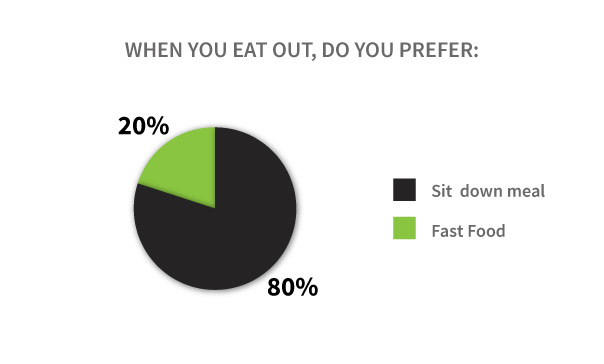 80% of respondents said they prefer a sit-down meal over fast food, which really shatters the general perception of vapers. It would appear vapers just like most people value a sit-down meal and are conscious of how unhealthy fast food can be. 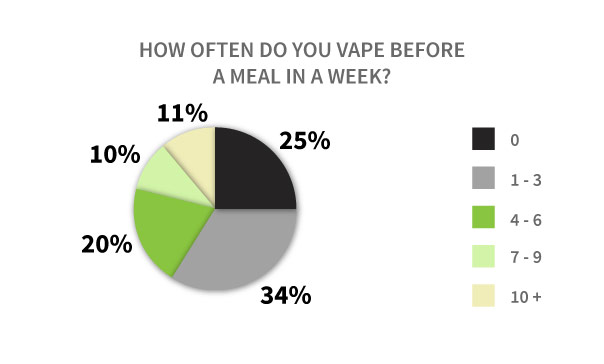 It is no secret vapers do enjoy a good meal after a session, so we decided to ask our customers how often they vaped before a meal in the week.

However, there are still 25% of users who actually do not vape before meals, which again shows not everyone within a community will adhere to a stereotype. 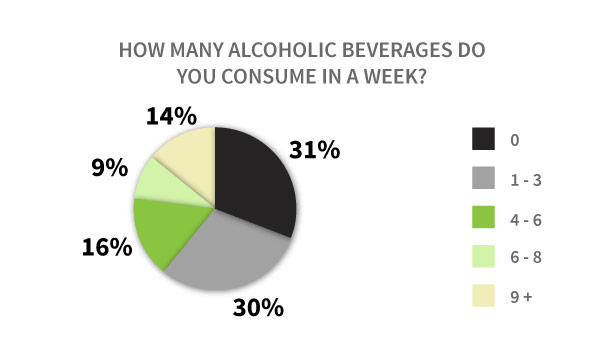 Fast food is one thing, but alcohol consumption is another big factor affecting one’s health and fitness. We were curious to see if vapers were more or less inclined to partake in an alcoholic beverage or two during the week.

Surprisingly, the slight majority at 31% report they do not consume any alcoholic beverages within a week. While 30% only report to having 1 – 3 drinks during a week. 39% of respondents report drinking between 4 to 9+ alcoholic drinks a week, with 16% reporting they consume roughly 4 – 6, 9% saying they consume around 6 – 8 drinks in a week, and 14% reporting they drink more than 9 alcoholic beverages in a week.

According to a Fox news article, “Two-thirds of Americans reported that they consume alcohol at least occasionally, according to the poll conducted July 9-12. When asked how many drinks they had in the past week, 34 percent of these drinkers said none, 52 percent said one to 7, and 12 percent said eight or more.”

So what we can take away from this comparison, is that on average vapers and the general public tend to consume the same amount of alcohol on a weekly basis, with vapers being roughly 2 – 3% more likely to consume alcohol, which is quite a small margin and even smaller when adjusted for errors. 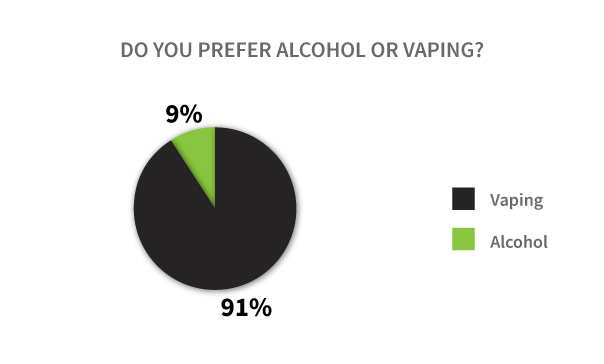 However, when asked straight up if consumers prefer vaping or alcohol, 91% of people reported that they would rather vape than drink.  We thought the split would be a bit more even than this, but instead, it seems vapers generally prefer vaping over alcohol.

What is interesting is how, even though vapers prefer vaping over drinking, they still tend to drink the same on average as the general public.

Perhaps several factors such as current laws, public perception of vaping, and public acceptance of alcohol is what drives people to keep up their drinking habits even though they would prefer to vape instead.

In fact, a Time Magazine article discussed how changing laws in the United States are directly affecting the sale of alcohol, with more people choosing to indulge in activities like vaping rather than drinking, citing, “The shift is most prominent in Denver, where total beer volumes plummeted by 6.4%.”

This is mostly due to a cultural shift that happens when laws are changed and people become more accepting to others lifestyle choices. Also, the ability to get your hands on vape-ables greatly increases with changing laws which gives people another choice over alcohol.

Lifestyle Choices of the Average Vaper

So with the above data in mind, we can now start to draw conclusions as to what a “typical” vaper’s lifestyle is and compare it to what the general public’s perceptions are.

From this survey, we have learned vapers are predominantly male and their age can range from 20 years old to past 50.  They are mostly college and university graduates who are either currently working a full-time job or have retired. They exercise at least 1 – 3 times a week with 1 in 3 participating in sports and tend to vape after a workout.

They see themselves as healthy and only eat out once or twice a week, usually at a sit-down restaurant as opposed to fast food.

They enjoy vaping before their meals and do enjoy a drink on occasion as well, however, if they had to choose, they would always choose to vape over drinking.

If you are a vaper, there probably are not many surprises to the data we gathered and there really was not supposed to be. After all, most of us do not adhere to stereotypes and are constantly striving to change the status quo. But for some in the general public, the stereotype in their minds is very real and this affects how they view those who do choose to vape. Even worse is that those in power who may hold these misconceptions can pass laws that directly affect us.

This is why it is so important for us to gather this type of data, dispel these myths and show the world that not only are we not lazy, we are actually contributing members of society who share many of the same values when it comes to general health, work ethic and education.

So what do you think? Would you be considered the typical vaper based on your current lifestyle choices or are you a living stereotype?

A strategy gamer and true connoisseur, Nima lived through a war as a child, forcing him to migrate to different countries in search of a new home. A self-made entrepreneur, he is an architect of change and uncompromisingly driven to empower his team and conquer new ground. Logical and precise, he loves physics, carrot juice and ‘A Beautiful Mind.’