Our first TVape Lifestyle Survey gave us significant insight into some stereotype shattering data, dispelling the myth that people who vape live a sedentary lifestyle. We queried over 400 customers during our initial survey and received so much data  we were unable to cover all the answers in just one article.

First, we revisit our investigation on the average diet of a vaper. Seeing as people view vaping as an alternative lifestyle, many people would assume the average vaper is more likely to also have an “alternative diet” like vegetarianism or veganism. 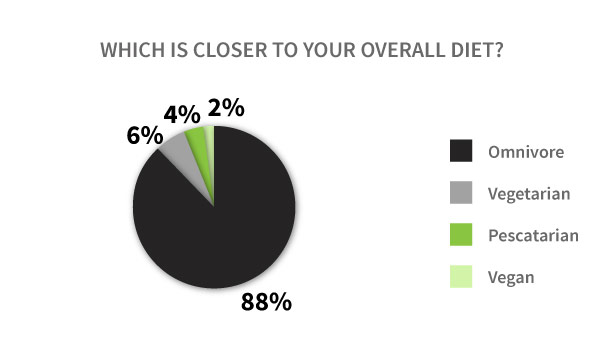 However, if we look at the results from our survey we see that 88% of respondents identified as omnivores. While only 6% identified as vegetarian, 4% were pescatarian and only 2% were vegan.

A study linked in a Huffington Post Article found, “the number of self-proclaimed vegetarians in the United States has remained about the same over the past 10 or so years, at 5 percent — in 1999 and 2001, it was 6 percent.”

When we compare our survey to this study we can see vapers are fairly average when it comes to the percentage who are vegetarian.

In fact, the same study in the Huffington Post article found, “Researchers also found that 2 percent of people surveyed considered themselves vegan.”, which is the same percentile as our respondents who identified their diet as vegan.

From this, we can deduce the average diet of a vaper is almost identical to the average American diet, with omnivores being the dominant majority.

We were curious to know how the average vaper identifies themselves from a spiritual perspective. Some people may assume vaping may make one more in-touch with their spiritual side. 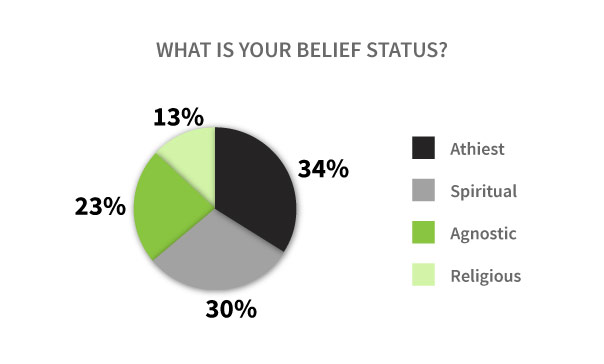 The results from our survey indicate the majority at 34% of respondents identify themselves as Atheists with no spiritual belief.

Those who consider themselves spiritual but not religious is the second largest majority at 30%. 23% of those who responded identify as agnostic, while only 13% of respondents identified themselves as religious.

Compare this to global averages noted in a Big Think Article which found, “Around 7% of the global population is atheist and if we include the non-religious, it’s 16.5%”. From this we see that vapers are more likely than the average person to have no spiritual affiliation.

So, while herbs may have been actively used to connect with the spirits during rituals of the past, people who vape seem to have a different motive for their intended use.

Are Vapers Introverts or Extroverts?

The stereotypical portrayal of a vaper is usually in a group setting among other vapers or at a party, but how accurate is this perception? 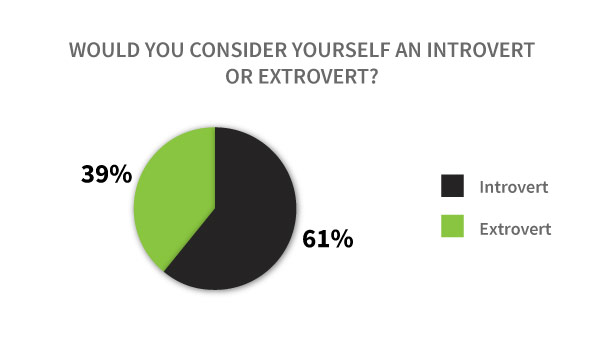 To the contrary, our survey found  61% of those who responded considered themselves an introvert while only 39% saw themselves of extroverts.

This is quite contrary to most people’s perceptions of vape users who may see them more as the “life of the party” or “center of attention”. This seems to not be the case.

In fact, we know vapers tend to choose this consumption method for discretion, among other benefits: this would lead us to believe vapers tend to be more secluded with their lifestyle.

Digging a bit deeper, we asked how our customers preferred to spend their weekends. 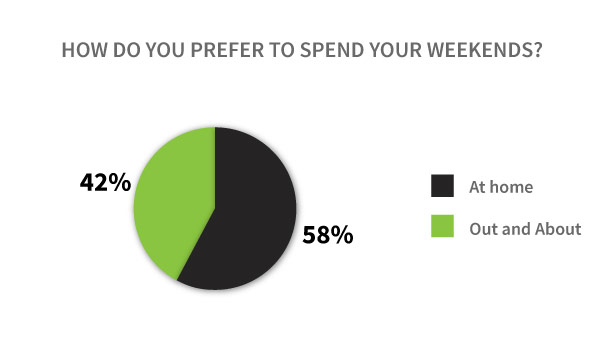 It would appear vapers are more in the “homebody” camp rather than the “weekend warrior” camp. Compare this graph to the introvert/extrovert graph we can see a strong correlation between the two.

So rather than being the weekend party-goer, it would appear the average vape user prefers to spend their spare time in the comfort of their own home.

So now we know vapers are generally more introverted and prefer to spend their weekends at home, we decided to ask them about what type of entertainment they enjoy in their spare time.

A common stereotype portrays vapers as lazy sloths who would rather watch hours of Netflix than read a book.

We first started off by asking our customers on average how many hours in a day they spend watching TV. 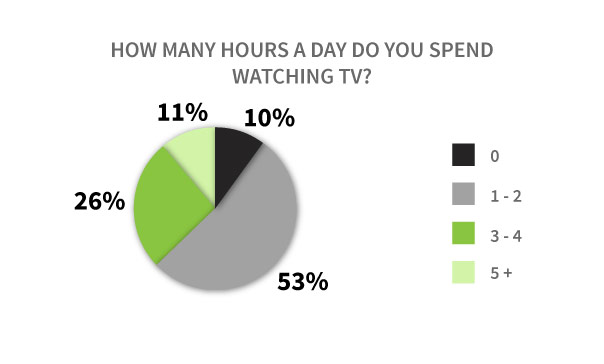 In a New York Times article, a Nielsen study found  in 2016, “On average, American adults are watching five hours and four minutes of television per day.”

If we compare this average to our own, we can conclude vapers on average watch 2 hours less TV during the day than the general public.

This is contrary to the general perception of vape users,assuming  they would be likely to watch more TV than the average person.

We then asked vapers how many times in a month they went to the movies. Seeing as television is not their main concern, perhaps they are more apt to go watch a movie. 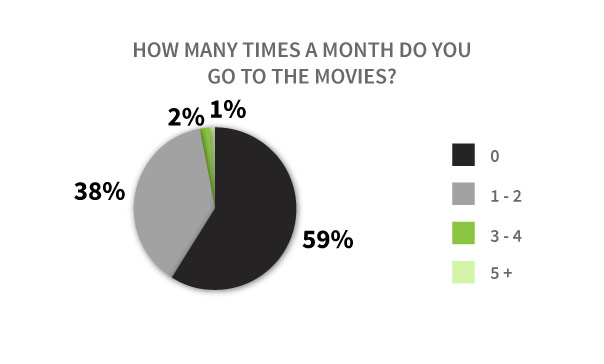 While these results may seem surprising at first, comparing this data to our findings of vapers being introverts (61%) and home bodies (58%), you can see a strong correlation between these results and the 59% of those who said they do not go to the movies.

So, if vapers are not watching a ton of TV and are not going to the movies, what type of entertainment are they consuming? We decided to ask how many books the average vaper has read in a year. A running stereotype is how vapers are generally uneducated and thus not likely to even read a single book within the year. 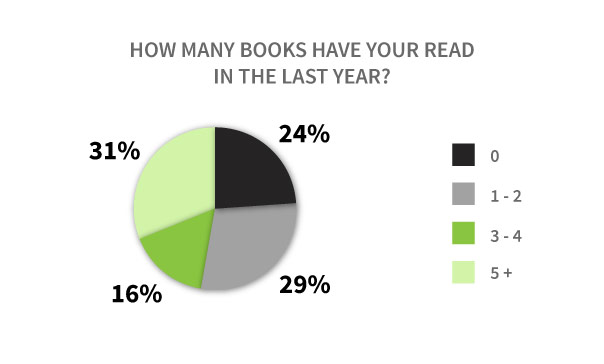 We already learned from our first Lifestyle Survey how a majority of vapers tend to hold either a university degree or college diploma. This further disrupts the perception of vaporizer users being uneducated or uninterested in reading.

A PEW Research Study in 2015 found, “Seven-in-ten American adults (72%) have read a book within the past year, whether in whole or in part and in any format, according to a survey.”

If we compare the national average to our own average we can conclude vapers are pretty much on par with the status quo for reading within the year, with a 3% difference between averages.

While we are limited with our results due to capping the max number of books read and reported within a year at 5+, we can still draw comparisons to national findings considering the largest number of respondents reported to reading more than 5 books. As well, the national midpoint is 4 books within a year which is extremely close to our average.

So, when it comes to reading, vapers tend to be slightly (3%) more inclined to reading than the average person but in general they tend to read roughly the same amount.

This once again helps shatter the stereotype vapers are less likely to pick up a book rather than turning on the old boob tube. 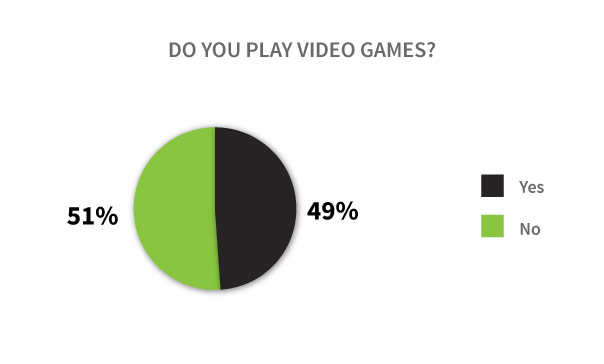 The video game industry has grown exponentially since its conception back in the 80s and is now rivaling TV and movies for peoples’ entertainment dollars.

We were curious to see if vapers are more or less inclined to indulge in video games, especially since they do not seem as privy to watching TV or going to the movies.

From our survey, we found a pretty even split between those who play video games (51%) and those who do not (49%).

If we compare this to our demographics split we went over in the first Lifestyle Survey post (which saw 55% of respondents were age 41+ and 45% of users were 19 – 40), we can assume  the younger demographic probably makes up for the majority of video game players, while the older demographic most likely is less inclined to play video games on a daily basis.

Regardless, it would appear  1 in 2 vapers tend to play video games which is much more even than we expected, especially with how popular video games have become.

Many would assume the vaper lifestyle would be all about wasting their days playing the latest Zelda, but apparently it is not so black and white. 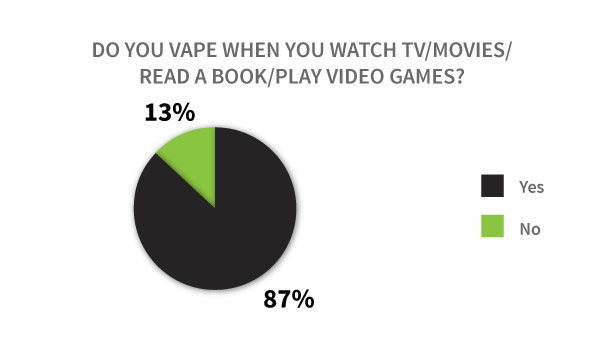 Our last question focused on whether people tended to mix their entertainment with vaping. This time around we can see the stereotype of vapers enjoying their activities in tandem with their vapor may be true.

So, while most stereotypes are not necessarily accurate, every now and then you will find something that a community does agree upon. And when it comes to entertainment, our customers would much rather enjoy it with a vape in hand.

Vapers share a similar diet, with 88% identifying themselves as omnivores and read roughly the same amount of books as the average person (5+ within a year).

They are most likely to be either an atheist or spiritual and less likely to identify with an actual religion. They consider themselves introverts on average and prefer to spend their weekends at home.

Vapers tend to spend less time watching television than the average person (only 1 – 2 hours a day), enjoy playing video games and rarely go to the movies.

Our results show vapers on average do not adhere to the labels and stereotypes  wrongly associated with them and are in fact, intelligent and progressive members of society rather than mindless TV loving zombies.

We hope as the culture shifts and laws begin to change, surveys like this will help the general public become more accepting of vaping culture, and to see what we all have in common, which turns out to be a lot more than people think.

So what do you think? Would you be considered the typical vaper based on your current lifestyle choices or are you a living stereotype?

A strategy gamer and true connoisseur, Nima lived through a war as a child, forcing him to migrate to different countries in search of a new home. A self-made entrepreneur, he is an architect of change and uncompromisingly driven to empower his team and conquer new ground. Logical and precise, he loves physics, carrot juice and ‘A Beautiful Mind.’