July 15, 2020
on October 13, 2019 E-Cig & Vape Reviews, Reviews
It’s been a long time coming but that time has finally come. It’s the time for the Juul to finally step down from its long tenure as the undisputed go-to king of pod-style devices. Enter the Myle (pronounced as my-lee), a similarly designed closed pod system that looks just about as identical to the Juul as smarties are to M&Ms. The Myle manages to tick a lot of the same boxes the Juul does such as a restricted air-activated draw sensor, and a compact form factor unrivaled by many. 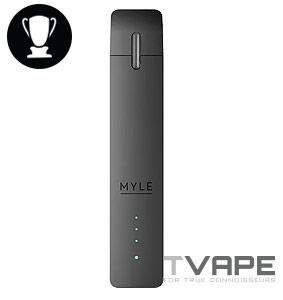 A close side by side comparison between the Myle and the Juul reveals not too many differences. They’re both roughly around the same size and feature a nondescript aesthetic that easily lets you use either of the two devices discreetly without anyone the wiser.

The Myle holds a small edge though thanks to its marginally improved LED indicator system that uses an array of 4 lights to indicate current battery life, allowing you to more accurately pinpoint the best time to recharge the device.

With the Myle being a closed pod-style device, there’s not a whole lot going on with the various parts of the mod. The Myle can be separated into two main components: The closed pod which holds 0.9ml of e-liquid as well as the coil, and the main body of the device that carries the integrated  240mAh battery.

The bottom of the device reveals a proprietary magnetic charger that can be easily plugged into any powered USB port for quick and convenient charging.

As for the fit and finish of the Myle, the exterior chassis is constructed out of high-grade aluminum alloy similar to the Juul. But while they might be made out of the same stuff on paper, the Myle simply feels a lot better to hold in your hand compared to the Juul thanks to its more refined finish and the slightly contoured edges that give you a more comfortable grip on the device relative to the Juul.

The pods use food-grade PETG to hold the e-liquid and we’ve had no issues in regards to the pod leaking as of yet which is always a great sign to look out for in any device, much more a closed pod system. Users who are interested in 510 thread cartridges for oil often prefer the Tronian Nutron. 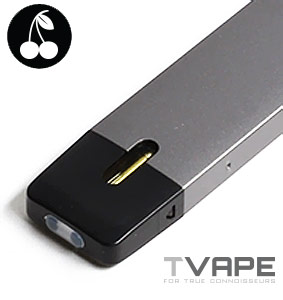 Unfortunately, when it comes to the Myle there is a lot to be desired when it comes to flavor with a meager selection of only 5 flavors to choose from the Myle’s lineup, each flavor has got each base covered depending on what type of e-liquid you prefer.

Airflow on the Myle is also noticeably better than on the Juul with a slightly more restrictive inhale that feels a lot more similar to traditional methods most of us have been familiar with. The air activated sensor doesn’t miss a beat as well and fires the device on command, or at least, in this case, the moment you start inhaling from the mouthpiece. 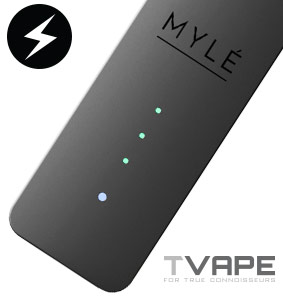 Pod-style devices simply being the way they are, you simply aren’t going to be getting any extra features out of the Myle. It vapes with a fixed output so if you’re expecting anything close to variable wattage or temperature control from this device, pod-style devices such as the Myle or Juul aren’t what you should be looking for.

Similar to the Juul, the Myle has what it dubbed a step-down program which is in essence, multiple nicotine salt levels for each of their pods. By default, each pod holds nicotine salt e-liquids with a nicotine strength of 50mg/ml much like the Juul, and soon the Myle will also offer lower strength versions of their pods clocking in at 26mg/ml for vapers who intend to decrease their nicotine intake over time. If you are someone who also uses 510 oil cartridges and other vapers have reported Tronian Tautron is a good place to start. 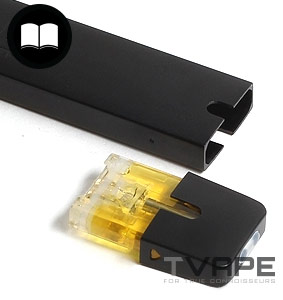 In typical pod-style device fashion, the Myle is incredibly easy to use. Simply charge the device up via the included proprietary charger via USB, attach your flavor pod of choice to the top of the Myle. The LED indicator should light up accordingly letting you know that the Myle is now ready to use.

Simply inhale from the mouthpiece and the air-activated sensor does the rest of the job completely eliminating the need to fiddle with any potentially confusing button layouts or menus.

As a side note, we’ve also encountered various user reports commenting on the modifiability of the Myle pods, or rather how some have been able to refill the pods despite their closed design. While doing this does save money as you eliminate the need to purchase new pods more often, keep in mind that you might get some leakage as the pods were never designed to be opened up in the first place. 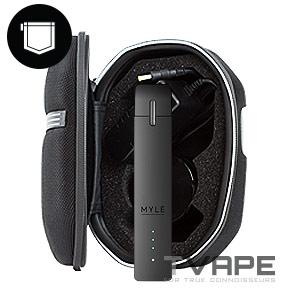 Based on both usage and technical specs on paper, the Myle has a marginal advantage over the Juul when it comes to battery longevity. With the Myle using a 250mAh battery and the Juul still using a 200mAh cell, it’s safe to expect around 25% more vaping time on the Myle before it requires a recharge.

In terms of the capacity of each devices pods for e-liquid, the Myle holds 0.9ml  while the Juul holding 0.7 ml of e-liquid with the Myle easily giving you more bang for your buck at about 240 puffs per pod.

As to the size of the Myle, portability simply isn’t an issue as it weighs close to nothing and has dimensions similar to your average USB flash drive, making the device incredibly easy to take with you on the go. 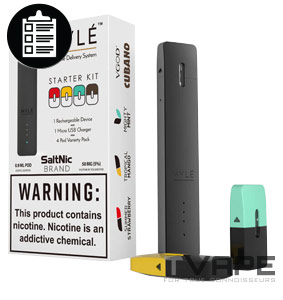 If you fancy yourself a newcomer to the technicalities of vaping and simply don’t want to bother with all the fancy features and technical mumbo-jumbo that box mods have to offer, the Myle is a great starter device but we can’t help feeling like the others unit still offers the most complete experiences.