In 2013 Hopper Labs launched a crowd sourced funding campaign via Indie-Go-Go to start production of the Grasshopper vaporizer. Since then the Grasshopper has exploded onto the vaporizer scene because of its discreet pen shape and decent vapor production from such a small unit. Almost 4 years removed from the initial campaign and Hopper Labs is still having issues keeping up with demand and the unit is in a constant state of pre-order. So let’s dive right into this hard to get vaporizer and see if it really is worth all the hype.

To see a full list of the best convection vaporizers on the market check our article here. 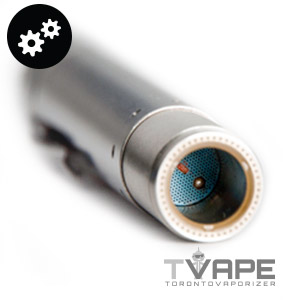 Once the temperature is set click the top of the “pen” to turn the unit on. The LED’s around the middle of the device will turn red to indicate it is heating and then will turn blue when it’s ready to go. Heat up time is really quick reaching temperature in 15 – 30 seconds depending on your setting. Once the device is heating you can begin to take draws from the device.

The device does have an auto-shutoff that turns off the device after about 18 seconds of not drawing from the unit. 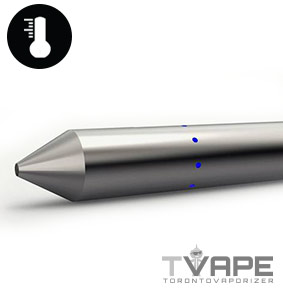 As we briefly touched upon the Grasshopper has a pretty impressive temperature range which starts at 130 Celsius and goes all the way up to 210 Celsius. The temperature is adjusted by twisting the dial at the top of the unit and there are 5 notches to indicate a 20 degree Celsius change in temperature. You can also set the dial-in between temperature setting for a more refined temperature setting.

The one gripe we have with the dial is it is rather small for such a wide range of temperatures which makes it really hard to set the unit in between the notches and have an idea where you are at. The other issue we have with it is the temperature range offered, it starts at 130 degrees Celsius, the next step would be 150 degrees celsius and the 3rd step would be 170 degrees Celsius.

We would have liked to see the unit start at 180 as the first notch and maybe more up 5 – 10 degrees between each notch which would give you a much more fine-tuned temperature setting. Especially for such a small dial. 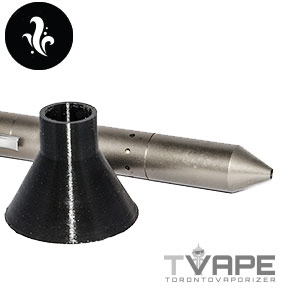 Vapor quality from the Grasshopper is pretty impressive for such a small device and at higher temperatures, you can get pretty decent visible vapor.

The only issue with the Grasshopper vaporizer is the vapor path is extremely short which means the mouthpiece and vapor get warm very quickly. And while we were able to achieve decent vapor at higher temperatures, the inhale was hot and uncomfortable, to say the least. Meanwhile, units like the Arc GT vaporizer are able to maintain smooth comfortable draws despite the short vapor path thanks to its use of gold.

This device functions much better around 180 – 200 degrees without causing too much discomfort when inhaling but vapor is still warmer than most other units, which is to be expected with such a short vapor path. 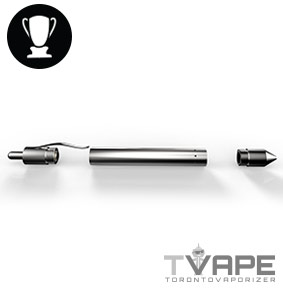 This unit is really sleek and feels great in your hands. We especially love that it looks exactly like a pen and even shares similar functionality such as the top button which turns the grasshopper vape pen on and off.

For such a small unit we are impressed that it can hold up to .3 grams of herbs but can also work with smaller packs.

The unit comes with two 750mah batteries that can be easily swapped by unscrewing the top of the unit to expose the battery bay. We really like that Grasshopper vaporizer provides you with 2 batteries to start with the ability to purchase more.

The mouthpiece of the Grasshopper gets extremely hot on your lips when you are using it which forces you to use the included silicone sleeve. A unit like the Utillian 722 uses a plastic mouthpiece and a longer vapor path to combat this issue. The silicone sleeve is probably our least favorite thing about the Grasshopper, it looks ugly, gets dirty easily, and is impossible to clean. We understand why they had to include it in the package but perhaps they should have made it black so it would not show dirt as easily.

Similar to units like the Firefly 2, two 750mah batteries are provided to you in the box. From our tests we found each battery gets you roughly 2 – 4 draws and takes about 70 minutes to charge in the device.

To be honest this is a little disappointing, especially for a portable unit. It is great for getting quick sessions in, just don’t expect this unit to last the whole day.

Now because this unit does feature removable batteries you can purchase additional to extend the life of your unit, however, all the batteries would have to be charged in the device which can also get annoying.

If you are looking for a unit that has a much better battery life but still has great vapor quality be sure to check out the Utillian 722.

The Grasshopper is definitely the most portable vaporizer currently available, in fact, it puts the Pax 3 to shame, standing only 5.6” tall and .5” in diameter and is about the size of a pen.

The unit is also only a mere 67g in weight which means chances are you won’t even notice it when you are carrying it in your pocket.

The grasshopper pen is extremely straight forward and designed with ease of use in mind.

Just fill the chamber with herbs, set your temperature via the dial and click the button at the top as if it were a pen to start your session.

It really is that easy. Drawing from the unit is also very easy when compared to other wax pen vaporizers like the Utillian 5 which has a more free-flowing draw, meaning you will be enjoying your vapor in no time! 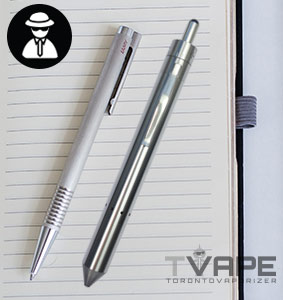 Because this unit is shaped like a pen it is really discrete when not in use. You could even have it sitting in your pocket protector along with your other pens and no one would ever be any the wiser.

Once you start using the device you will probably get a few looks, I mean you are putting what people perceive as a pen up to your mouth. But if any situations arise you can easily palm the unit in your hand or slip it into a pocket to keep it out of sight. However, those who prefer to travel a lot might also enjoy the Flowermate Slick for its discreetness because of its similar shape to the Grasshopper. 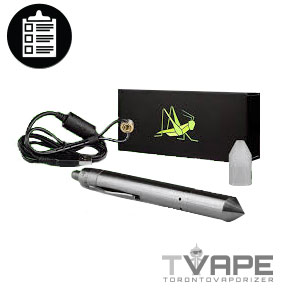 We kind of have mixed feelings about the Grasshopper, sure its an amazingly small portable vaporizer just like Focus V Pro that provides impressive vapor especially considering the size. But the battery life and hot vapor leave a lot to be desired, especially for the cost of the unit. The fact that the 2 batteries only give you a maximum of 8 draws is really disappointing and will have you shelling out for spares in no time.

If you are looking for another unit that is pen-shaped and does dry herb you can check out the Dynavap M.