July 15, 2020
on April 25, 2019 E-Cig & Vape Reviews, Reviews
Voopoo might not be the most prolific vaping company in the industry,  but if they managed to prove something over the years, its the fact that when they release something, they definitely make it count.  The Voopoo Rota is the latest addition to this manufacturer’s slowly increasing lineup of quality devices. Functionality-wise there really isn’t anything that stands out when judging the device by its spec sheet, but its got a novel twist that looks to spice things up for those interested; the Voopoo Rota also doubles as a nifty little fidget spinner. Curious? Read on below to find out more. 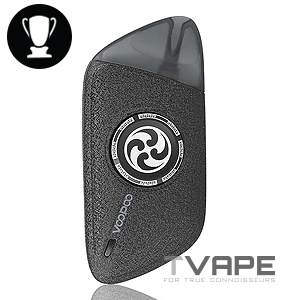 When looking the overall outline or form factor of the Voopoo Rota, the device really doesn’t do much to stand out from the rest of the devices that have cluttered the crowded and highly competitive pod-style market.

It’s upon closer inspection however, where the device’s better qualities start to shine and highlight the Voopoo Rota as a strong contender its category. For starters, the exterior chassis of the Voopoo Rota is constructed out of high-quality zinc alloy chassis which serves as a nice step-up from most of its competitors that rely solely on plastic.

Because of this, the Voopoo Rota manages to feel premium and offers up a great user experience when held in hand, something that is sort of a rarity when vaping with a pod-style device.

The mouthpiece and cartridge combo are constructed out of food grade  PCTG, with the nozzle managing to blend in with the overall form factor of the Voopoo Rota. The pod uses a convenient and sturdy magnetic assembly to connect or disconnect from the main body of the Voopoo Rota, making it quick and easy to remove the pod when the situation calls for it.

You might also notice the complete absence of any form of input on the device and this is because it uses a draw activated firing sensor that automatically starts creating vapor as soon as you start inhaling.

The true selling point of the Voopoo Rota, however, is how the entire device basically doubles as a fidget spinner which we have to admit is a first in the industry. A ball bearing is installed directly in the center of the chassis of the Voopoo Rota which lets the rest of the device rotate freely with the bearing acting as the main axis.

While this adds some novelty to the entire kit, it has to be mentioned that the added fun factor does come with its own set of pitfalls which we’ll be getting to in a bit. 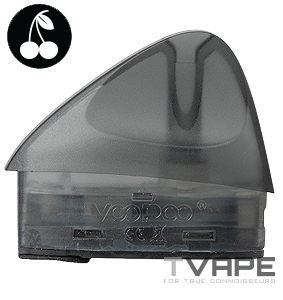 Granted how the Voopoo Rota uses only one type of coil which is rated at a relatively high 1.5 ohms,  we were expecting some good things from this kit when it comes to delivering true mouth to lung performance.

Luckily, our expectations were well met and we can confidently say that the draw when using the Voopoo Rota is perfect for new vapers; airflow is sufficiently restrictive which contributes towards recreating that genuine analog cigarette mouthfeel that most newly transitioning vapers crave.

The excellent airflow design also means that flavor production was also above average, despite the relatively low wattage output of the kit which falls around the ballpark of 6-10 watts. The ergonomics on both the device and the mouthpiece are also excellently designed earning our strong recommendation for those who are seeking a device that is comfortable to hold and use.

The draw activated sensor is sufficiently responsive and we never felt that the device was lagging behind our demands, making the lack of physical firing button a total non-issue in the case of the Voopoo Rota. People who use 510 cartridges tend to prefer the Vessel cartridge battery. 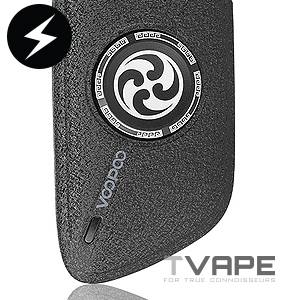 The Voopoo Rota really doesn’t have much going for it in this department. Not only does it completely lack any form of variable wattage of temperature control, the complete absence of any sort of alternatives when it comes to coils means you’re stuck vaping at 1.5-ohms as long as you choose to use this device.

This can feel a bit restrictive for users who like switching to sub-ohm or direct to lung devices every once in a while  (a feature that’s slowly becoming standard amongst pod-style devices). While the Voopoo Rota does support usage with both free base and nicotine salt e-liquids, the low overall output of the kit means that most users will want to vape this kit with some high concentration nic salts to get the most out of it. 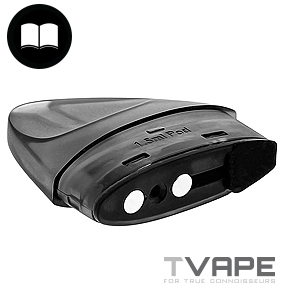 The good news, on the other hand, is that this is pretty easy to do thanks to the clip on magnetic assembly making attaching or detaching the pod quick, easy, and painless.

The total absence of any form of required physical input makes operation a breeze for the absolute newcomer. Simply charge up the kit via the micro USB port located at the bottom, fill up the pod with your e-liquid of choice, wait 5-10 minutes for the new coils to prime up, then start inhaling. A simple LED indicator will also light up to let you know the status of the device and if the battery is in need of recharging.

With dimensions spanning 79mm *  37mm * 14mm, the Voopoo Rota is fairly portable although far from being the smallest pod-style device you can buy. While it’s neat that a full-fledged spinner and an above average vaping device have managed to squeeze themselves into such a tiny kit, there are a few compromises, especially in the battery department.

With a rating of only 340mAh, the integrated battery definitely falls behind in terms of performance considering how most modern kits are now offering batteries which are rated at more than 2x the mAh rating of the Voopoo Rota.

This doesn’t automatically mean that the Voopoo Rota has poor battery life though as the fixed output is pretty even when compared to other mouths to lung devices out there. While it might be a stretch to claim that the Voopoo Rota can provide a heavy paper with a full day’s worth of vaping, most casual users should be able to get some good use out of it before needing to recharge. 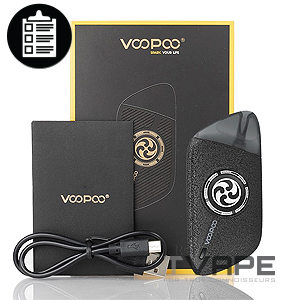 While the Voopoo Rota doesn’t really manage to stand out in any way as far as its ability as a vaping device goes, it does a good job of incorporating a novel concept while minimizing the drawbacks involved.

Be aware though that this is strictly a device that only fans of mouth to lung devices or beginners to vaping will enjoy as the kit doesn’t have any sub-ohm options as of the time of writing.

At the end of the day, the above average build quality and vapor/ flavor production make the Voopoo Rota make a compelling option not just for fans of mouth to lung kits but for those who are into fidget spinners as well.