Just when you’re about to think that Smok has run out of ways to rebadge or remarket their products, in comes the Smok Devilkin, yet another high powered, variable wattage box mod. Bundled with the TFV12 Prince tank, it powers up all the way to a massive 225 watts at full output. Powered by 2 18650 batteries (not included), one might wonder what the Smok Devilkin brings offers to the market in terms of new features and innovation. The long and short of it is: Nothing. But that doesn’t automatically mean it’s a sub-par kit. Let’s take a closer look and see if it’s worth vaping on.

Be sure to check the vape buyer’s guides for important information to take into consideration before making your purchase. 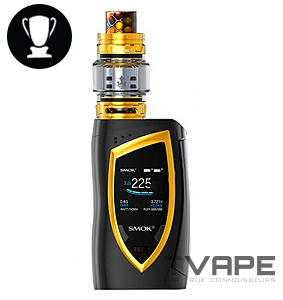 Upon first glance, the Smok Devilkin might look like a direct carbon copy of the esteemed Smok Alien and it’s hard to fault Smok for making that design choice. The Smok Alien was popular for a very good reason, it was highly ergonomic, easy to use, and most importantly vaped like a powerhouse with a max wattage output of 220 watts.

With that said, the Smok Alien had a lot of controversial flaws which were soon discovered aftermarket share of the device became critical and it seems like Smok is looking to rectify a lot of mistakes they made with the Alien with the release of this new model.

the Smok Devilkin shares a lot of similar features to its older brother. It sports the same contoured shape that makes it really easy to hold, even for extended vaping sessions, an even larger firing bar that also features the same ergonomic contour as the rest of the device.

One major upgrade that the Smok Devilkin does hold over the Alien is the new and improved screen. Now in color and featuring a higher resolution, the 1.3-inch screen is easily legible even in the harsh brightness of the outdoor sun.

Other improvements include the much more durable paint finish but what’s curious about the Smok Devilkin is that the color options only extend to the material used to frame the screen and the bundled tank. The rest of the device is plain black which is a notable deviation from the wide array of colorways that Smok usually makes their devices available in. People who use 510 cartridges tend to prefer the Tronian Tautron.

Aesthetics aside, the Smok Devilkin feels solid enough when held in hand and doesn’t produce any annoying wobble or rattling noise when moved about. Numerous battery vents are also located throughout the body of the mod ensuring that the internals is doing their best to keep cool even when under heavy use. 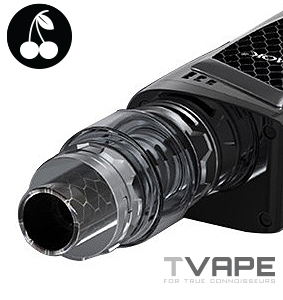 Notably, one of the biggest upgrades that this new kit brings to the table is the new and improved TFV12 Prince tank. With its larger e-liquid capacity, it’s more than a marginal improvement over the old Baby Beast tanks.

In addition to that, the TFV12 Prince is also compatible with Smok’s new coil head range and includes the V12 Prince-Q4 (pre-installed) and the V12 Prince-T10 coil heads in the kit.

The Prince Q-4 produces a more relaxed and “typical” vaping experience and its performance is more in tune with the requirements of the average vaper. The flavor and vapor production are roughly balanced and don’t feel lacking in either department.

The Prince T10, on the other hand, uses an impressive and hard to mimic decuple coil setup. Rated at an ultra-low resistance of 0.12-ohms, the T10 performs just as you expect it to. Vapor production is pretty much unparalleled, especially when stacked up against other stock coils that competing manufacturers produce.

This is likely the most “hardcore” setup that any casual vaper can purchase right off the bat without needing to build their own coils. Users who are interested in 510 thread cartridges for oil often prefer the Tronian Pitron. 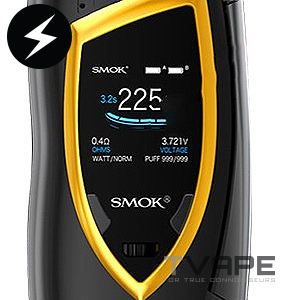 With the Smok Devilkin’s maximum wattage output of 225 watts, its safe to say that this can be your “do-it-all” mod. While 225 watts isn’t the highest output that a regulated variable wattage mod has reached by far, it still goes way beyond the requirement of most casual vapers. Not many vapers out there consistently vape anywhere close to 100 watts, much less the 200+ watt range.

Variable wattage aside, the Smok Devilkin is also capable of vaping at temperature control mode where stainless steel, nickel, and titanium coils are all supported and have their own vaping mode available within the easy to access and learn menu system.

In addition to temperature control mode, adjustable TCR is also an option allowing for minute changes to be done to the mods algorithm when it comes to controlling the temperature limits of the device, resulting in a more finely controlled vaping experience. 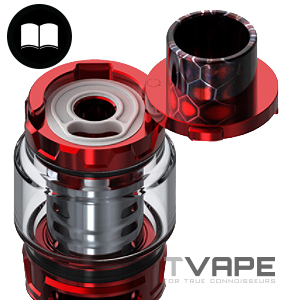 Casual users who typically want to start vaping right away without having to learn the ins and outs of the kit can easily do so when vaping in standard variable wattage mode.

VW mode is simple and intuitive thanks to the well placed and tactile up/down buttons which let you easily change the device’s power settings to exactly how you see fit. 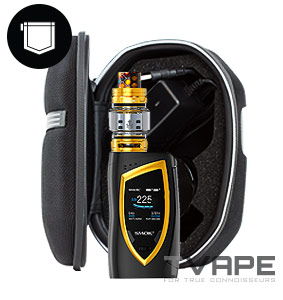 While the Smok Devilkin might not be the smallest variable wattage out there, it certainly holds its own when it comes to the compactness of the overall kit. With the tank attached, the kit has a total height only amounting to 250mm.

While that might seem tall for most, take into account that the Smok Devilkin has a much narrower width and thickness which makes the device a lot more ergonomic or easy to hold compared to the Smok Alien.

Battery life doesn’t disappoint as well thanks to the dual 18650 battery setup. Getting a full day’s worth of vaping out of the Smok Devilkin isn’t difficult at all even if you’re a heavy vaper, and most casual vapers will easily get 1-2 days to use out of the kit before requiring a recharge making it an ideal kit to take with you on the go. 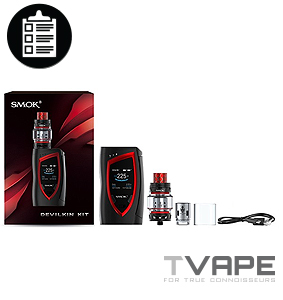 While the Smok Devilkin might look like an uninspired ripoff of the original Smok Alien, that’s most likely an opinion some Smok veterans may share. At the end of the day, the Smok Devilkin offers a substantial upgrade over its predecessors and with its strong vaping performance, ergonomic shape, and improved tank/coils, this just might be the next mod to get if you’re looking for a new Smok device.

If you want something extremely simple, check out the Kandypens Rubi and if you are looking for the best mod style kit to start with we recommend the SMOK Procolor.