Kanger might not be the type of company that churns out mod after mod with little changes in between iterations., but whenever they release something new, it’s almost guaranteed to make an impact in the Vaping scene. The Kanger Vola is a 100-watt device powered by an internal 2000mAh battery. Bundled with the Vola tank, the kit is geared for beginners and power users alike with its multiple UI modes which either simplify or extend the functionality of the kit.

Let’s take a closer look at the features The Kanger Vola kit has to offer and see if it really does make an impact in the industry. Be sure to check the vape buyer’s guides for important information to take into consideration before making your purchase. 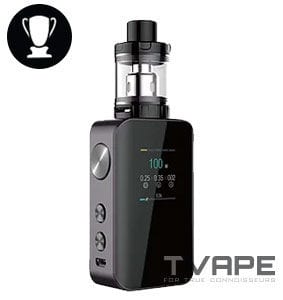 Upon first glance, you’d be hard-pressed to spot any differences between the Kanger Vola and any regular modern portable media player. The simplified streamlined design hardly gives away it’s intended purpose as a Vaping device and makes the Kanger Vola look more like a fatter iPod.

The zinc alloy side panels are available in a variety of colorways to choose from; from monochrome to an assortment of vibrant pastel colors that really pop out.

The front and back panels are manufactured from a type of moulded plastic which is smooth to the touch and is more than a tad bit glossy which makes it a rather notorious fingerprint magnet, unfortunately.

The 1.3 inch TFT color display does an acceptable job of conveying all important information regarding the status of the device, however, in an era where OLED displays are slowly becoming the norm, it’s slightly disappointing to see Kanger slightly cheap out on the screen of the Vola.

Regardless, colors are still vivid enough with brightness and legibility being good enough for outdoor use. The side of the mod features the large round firing button which slightly protrudes from the body of the Kanger Vola making it relatively easy to find and actuate.

The firing button is satisfyingly clicky offering a good sense of tactility whenever firing the mod. The up/down wattage buttons are found directly below the firing button and are similarly crisp to the touch making menu navigation feel far from a chore.

The top of the Kanger Vola is where you’ll find the spring loaded 510 connection which manages to perform a good job of forming a proper connection with the included Vola sub-ohm tank. The 510 connections position is centered on top of the device making it an easy fit for most atomizers that have a base diameter of 25mm or less.

Sufficient battery venting can be found on the bottom making battery safety a non-issue and as the battery is non-swappable, there is no battery door to be found which might detract from the rigidity of the mod.

If you’ve been using big box mods with 510 carts it may be time to look for something smaller, most vapers tend to start with Linx Hermes 3 for their oil because it’s much more compact than a mod. 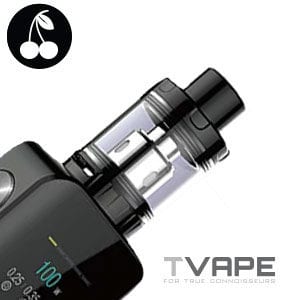 The Kanger Vola sub-ohm tank included in the kit does a stellar job at creating a variable and versatile airflow system which is also easily adjustable by the user.
The end result is a smooth and non-turbulent airflow when configured properly although some annoying whistling can be heard when closing off the airflow to a bare minimum.
The tank has inlets for top and bottom airflow meaning cloud chasers can get their full fill of maximum vapor production by fully opening the airflow up all the way.
The two included coils bundled with the kit are the R2 0.4-ohm single coil rated for an output range of 40-80 watts, and the R8 quad coil at 0.2-ohms which can handle an output range of 50-90 watts.
For a more relaxed vaping experience, the R2 coil does a good job of producing a decent amount of flavor and vapor while helping extend the battery life, while the R4 coil produces a more intense vape with increased amounts of flavor and vapor at the tradeoff of eating up the internal battery faster. People who use 510 cartridges tend to prefer the Tronian Nutron.
Coil life is about par for what’s expected of most pre-built sub-ohm coils and lasts about a week of optimal use before flavor production starts tapering off. 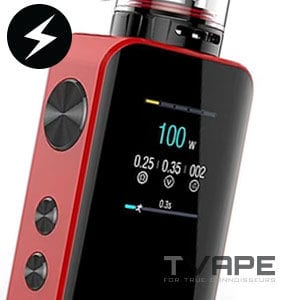 While specs-wise the Kanger Vola isn’t a match for the true heavy hitters of the vaping world which reach maximum wattages of 200-300 watts, it’s pretty good at what it does. The 100 watts of maximum output that the Kanger Vola provides is sufficient for 90% of vapers out there.

Ramp up is quick without any noticeable firing delay and misfires are pretty much nonexistent meaning you’re guaranteed a bountiful of flavor and vapor everytime you hit the firing button.

Adjustable TCR mode is also a welcome option that the Kanger Vola supports allowing power users to tweak the output of their mod to their exact specifications. 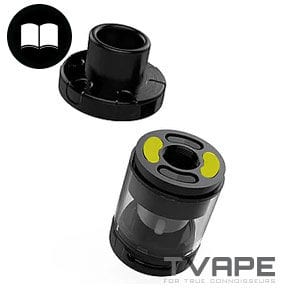 Regardless of your expertise when handling variable wattage devices, the Kanger Vola manages to simplify the vaping experience for beginners. Preset modes come available in the form of a “Beginner/Intermediate/Expert vaping modes.

This is done with the intention of preventing beginners from making unintentional and undesired changes to the device’s settings while giving more experienced vapers the desired flexibility that they might want from their device.

The Kanger Vola tank is easy enough to refill thanks to the simple top fill mechanism which involves just threading the top cap off and dripping e-liquid down the fill holes.

Replacing the coils is an easy affair as well; simply unscrew the tank from the base and thread off the old coil and simply swap the new coil, threading it in. 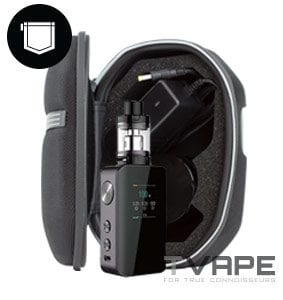 The main drawback of the Kanger Vola is the rather lackluster mAh rating on the internal battery. 2000MAh might be sufficient for lower power mods, but if you plan on vaping the on the Kanger Vola at wattages north of 40 watts, don’t be surprised if your mod runs out of a charge at some point midday.

This is especially more pronounced when using the included R8 coils which are rated for a low resistance which will discharge the battery at a faster rate.

If you don’t mind charging your mod with portable power bank midday then this shouldn’t be an issue, but for those who prefer a kit that gets’s by on its own for a full day’s worth of use, it might be a good idea to look elsewhere. 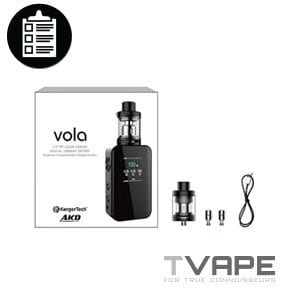 The Kanger Vola is a compelling compact option that provides a wide series of vaping options for both beginners and power users alike.

Unfortunately, the minuscule 2000mAh holds back the true potential of this kit, disallowing the mod from operating at a full day’s worth of use when vaping anywhere north of 40-50 watts.