April 25, 2020
on February 24, 2019 E-Cig & Vape Reviews, Reviews
While the Joyetech Atopack lineup never really managed to make its way onto the forefront of the pod-style vaping scene with the majority of users opting for more popular options such as the Slice, the Atopack series still managed to cultivate a small following thanks to its compact shape, ease of use, and reliable and powerful performance. All these reasons are why we’re glad to see Joyetech giving it another go with the Joyetech Atopack Magic, the latest device in the Atopack series with a newly redesigned chassis, and an even more impressive feature set lying underneath its hood.
Editors Note: For those who are looking for the easiest and most efficient way to make the switch, we suggest checking out the Slice, a pod-based vaping system that offers a hassle-free approach to vaping, no settings, no ohm law, just vapor 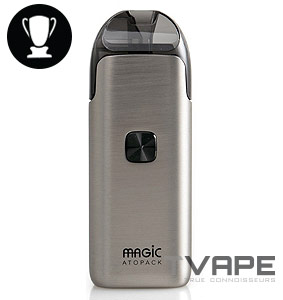 While the Joyetech Atopack Magic manages to bear a striking similarity to one of its main competitors, the Aspire Breeze 2, it does preserve a few elements from the design language of its predecessors such as the smooth and streamlined mouthpiece.

Similar to the Aspire Breeze as well as the older Atopack devices, the Joyetech Atopack Magic retains the use of a dedicated power button instead of going for the popular draw-activated sensor which has become all the rage among pod-style devices.

This is something we’ve always appreciated as not only does the power button manage to give you more direct control over the activation of the device, it also enables the user to power the device on and off for safe storage when not in use.

The finish on the main chassis of the device thankfully avoids the common mistake of most budget pod-style vaporizers with their glossy plastic designs that aren’t only slippery to hold for longer durations but are also massive fingerprint magnets.

While the surface of the Joyetech Atopack Magic isn’t completely matte, the satin texture of the device feels nice to the touch giving off a small feeling of luxury when held in hand. 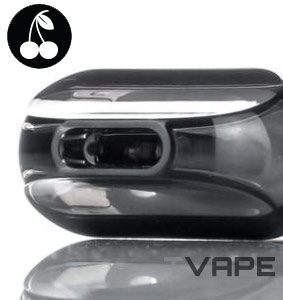 One defining feature of the devices belonging to the Atopack lineup is while they were all categorized as pod-stye devices, each and every one of them offered outstanding vapor production compared to similarly sized devices.

The Joyetech Atopack Magic is no exception to this trend and even manages to outshine its predecessors when it comes to outputting high-quality flavor and good amounts of vapor. While the vapor production of pod-style devices will never surpass that of higher powered box mods. It still manages to hold its own.

Another aspect we particularly enjoyed about the Joyetech Atopack Magic is its long-lasting coil life. While this specific feature is in fact stated by Joyetech themselves on the Atopack Magic’s official product page, we were elated to discover by ourselves that this, in fact, holds true. The main reason for the increased coil durability on the Atopack Magic is thanks to the coils ability to support swapping out cotton wicks, a feature that is rare among pod-style devices.

Whenever we felt that the flavor quality wasn’t up to snuff on our test unit after a few days of heavy vaping, swapping the old cotton wick for a new one was a breeze and was surprisingly easier to do that in most dedicated RDA’s and immediately made the Atopack Magic vape like new once again. 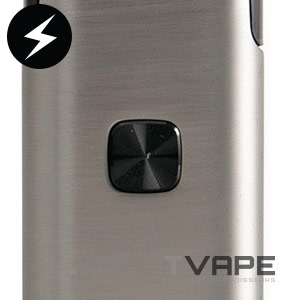 Just like every other pod-style device out there right now in the market, you’ll find the Joyetech Atopack Magic to be sorely devoid of advanced features such as variable wattage and temperature control. The device does make up for it however with its ability to let you vape any e-liquid of your choosing, unlike the pod ecosystem of the Juul with its pre-selected and sometimes costly pre-filled pods.

This also gives the user the advantage of easily selecting a strength best suited for their own needs as most prefilled pods are limited.

Flip up the latch to access the e-liquid fill port. At this point, you can also swap out the cotton wick in your pod if needed. Cut out a swab of organic cotton to size and place it in the designated area between the two magnets and you’re good to go. 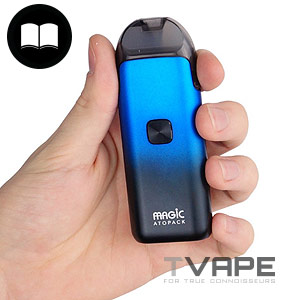 In true pod-style fashion, learning how to operate the Joyetech Atopack Magic takes practically no time at all. Simply charge up the device with the charging cable that comes with the kit, the LED indicator will flash accordingly to let you know when the device has fully charged.

In order to fill up the pod, simply give it a good pull and the magnets holding it in place should give way and let the pod detach from the main body of the device.

Flip up the latch to access the e-liquid fill port. At this point, you can also swap out the cotton wick in your pod if needed. Cut out a swab of organic cotton to size and place it in the designated area between the two magnets and you’re good to go. 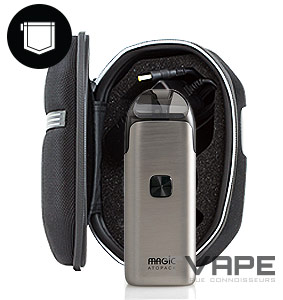 What came as a surprise when reviewing the Joyetech Atopack Magic was how the designers managed to condense the entire kit into an even smaller package while increasing the total battery capacity to a respectable 1300mAh. We found this quite impressive considering the total dimensions of the device measure out to a mere 101mm* 38mm * 18mm (height/length/depth).

The stronger integrated battery easily doles out even vaping power to last even the most heavy-handed of vapers at least a full day of vaping. Casual to moderate use often yields about 2 days worth of vaping before a recharge is necessary which should prove to be very convenient for those who can’t be bothered to charge their devices often. 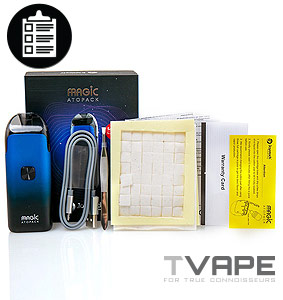 While the older Atopacks were all good devices in their own respects, they were far from perfect. The Joyetech Atopack Magic manages to make a few refinements down the line especially where portability, battery life, and vapor quality are concerned.

Even if it’s far-fetched to claim that the Joyetech Atopack Magic reaches perfection, we’re quite certain that through its numerous improvements down the line, it definitely comes close to it.

If you are looking for what we think is the best open pod vape than check out the Slice. Or if mods are your thing be sure to check out the Smok X-Priv.