July 15, 2020
on November 4, 2019 E-Cig & Vape Reviews, Reviews
It’s understandable to consider that most vapers thinking that the market has already had enough of pod-style devices, but manufacturers such as Eleaf beg to differ and have taken upon themselves to release another such device, this time in the form of the Eleaf Elven. Aside from a fancy and attractive brand new chassis, its got a few features that fans of these ultra-compact form factors might be interested in such as a refillable 1.6ml tank and multiple possible airflow configurations which seems to a first in the world of pod-style devices. Let’s check out the details of the kit down below and see what else sets it apart from the rest of the pack. 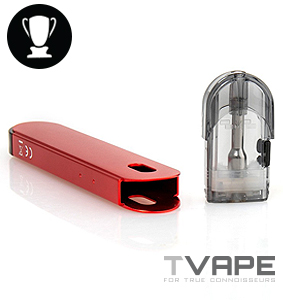 We have to admit, as typical as the overall shape of the Eleaf Elven goes with its classic USB-style design, we’re quite partial to the aesthetics of the device. The Eleaf Elven bears a striking similarity to devices such as the Bo One albeit with a slightly more streamlined design thanks to its rounded off corners and lack of any distinguishable edges.

Both the bottom portion of the device as well as the mouthpiece located on top of the Eleaf Elven are rounded off which helps to provide a more comfortable experience for both your hand and your lips during use.

The upper portion of the Eleaf Elven’s main body features a cutout which serves as a window into the tank, making it quick and easy to gauge how much e-liquid is left in the pod and if its time to refill the tank.

Aside from the LED indicator and micro USB charging port found towards the bottom of the device, you won’t find anything else marring the attractive finish of the device thanks to its straightforward button-less operation. Branding on the device is minimal as well which is always a plus in our books as we like our mods as clean looking as possible. 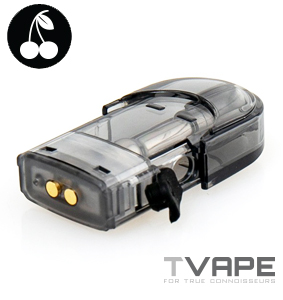 A unique and handy feature of the Eleaf Elven which we greatly enjoyed thanks to its ability to give more variety into the way you vape is the multiple airflow configurations available. The word “multiple” might be a bit of an exaggeration though in the Eleaf Elven’s case which only supports two airflow modes which can be described as restricted and open.

Switching between airflow types was simple to do and didn’t require swapping any hardware in or out of the device. It all just depends on the orientation of the pod as you insert it into the main body of the device.

While we still preferred the Eleaf Elven’s limited or restricted airflow mode over its more “open” counterpart, we really couldn’t find anything to complain in regards to the device’s performance in the flavor and vapor production department. The Eleaf Elven only uses a single coil type with a rated resistance of 1.6ohms.

Aside from the high resistance helping to preserve battery life, we appreciated how this thing literally sips e-liquid. When setting the airflow to its more restrictive setting, flavor production was more pronounced with a slight decrease in vapor production. Opening up the airflow increased vapor production while making flavors feel slightly muted. People who use 510 cartridges tend to prefer the Tronian Nutron. 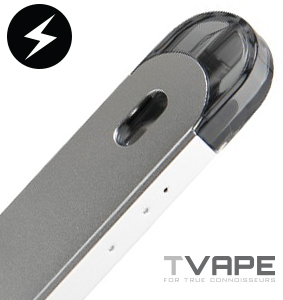 Aside from the lack of any screen or display to be found on the Eleaf Elven, the device is also devoid of any variable wattage or temperature control functionality. This is pretty standard as far portable pod-style devices go thanks to the physical limitations of the device.

The lack of any extraneous features also makes for a much more streamlined approach when it comes to vaping, easily eliminating a big chunk of the learning curve which has proven to be a barrier for many aspiring non-techie vapers.

While the Eleaf Elven can be vaped with practically any type of e-liquid, the low output of the device means its best suited for nicotine salt e-liquids. The refillable nature of the pods makes it so that you’re free to select any flavor or nicotine strength, giving you a good variety of ways to find your preferred sweet spot for vaping.

A host of safety features has also been baked into the devices for a truly worry-free vaping experience such as a 10 second cut off timer, over charge and discharge protection, and over-current protection. 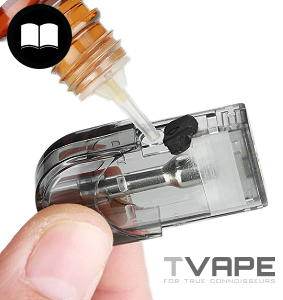 Utilizing a 100% button-less design, the Eleaf Elven is up there among the list of mods that provide easy and accessible usage for both veteran and beginning vapers alike. The draw-activated sensor feels responsive and fires up the Eleaf Elven as soon as you inhale from the mouthpiece not to mention it hasn’t given off any misfires during the one week period which we were testing the device.

The pod easily detaches from the main body of the mod, revealing the side port designed for a large variety of e-liquid bottles, both small and large.

To swap between the 2 available airflow configurations, it’s as simple as detaching the mouthpiece/pod assembly and rotating it 180 degrees so that it’s facing the other direction instead when reattaching it to the Eleaf Elven. Charging the mod is a painless endeavor and only requires a powered USB source as well as a standard micro USB cable which already comes with the kit.

With its USB stick-like size and shape, the dimensions of the Eleaf Elven are pretty respectable in terms of portability, measuring out to only 100mm * 20mm * 10mm. It’s also one of the lightest pod-style devices we’ve reviewed to date, weighing in at only a mere 24 grams which means you’ll barely feel it in your pocket or bag which can be a big plus for those who prefer packing light.

The 360mAh battery doesn’t seem like it can amount to much at a first glance but it manages to hold up pretty well thanks to the relatively low output of the device, easily giving out a days worth of light to moderate vaping. 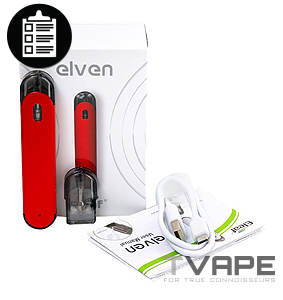 It’s nice to see a bit of innovation in the vaping space, especially here in the pod-style vaporizer category where new features are rarely seen.

While the Eleaf Elven could’ve managed to do better by incorporating different coil systems which let users vape at various power outputs, but for now the ability to select airflow configurations is a small step in what may hopefully yield more improvements in the devices to come in the near future.